A Guide to Trail Running in DC
by Maureen Moslow-Benway

Trail Running is one of the fastest growing sports in America today and in the Washington D.C. metropolitan area, we are fortunate to have a number of excellent trails located relatively nearby. Trail Running appeals to runners formany different reasons. For some, running through the forest is a relaxing way to escape not only traffic, but also the hustle and bustle of everyday city living. For others, the soft ground is far easier on their bones and joints than either cement or asphalt. Some find the cool, shaded forest allows them to run year round in Washington's hot and humid climate, while others enjoy spending time viewing the local flora and fauna and communing with nature. Trail Running provides a different type of work-out than road running. Trail obstacles, such as rocks and roots, force runners to pay close attention to where they place their feet. It also utilizes muscles that aren't normally used while running on paved roads. Best of all, trail running is just plain fun! Sometimes you just can't help but feel like you're a young kid again, exploring the woods in your neighborhood. In this article, I have reviewed five places to run that have miles of trails, spectacular views and are all easily accessible from Virginia, D.C. and Maryland. 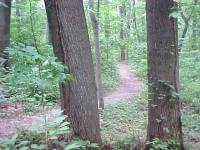 The Bull Run/Occoquan Trail is a well maintained, 18 mile trail that runs between Fountainhead and Bull Run Regional Parks. The trail is perfect for running--it is clearly marked (follow the blue blazes) and it's surface is primarily hard packed dirt, although it can by rocky, rooty and muddy in spots. The trail is heavily forested and it has rolling hills, a number of stream crossings and wonderful views of the Occoquan Reservoir and the Bull Run River. Additionally, it passes through several Civil War battle sites. There is also plenty of wildlife to view including deer, wild turkeys, beavers, geese and herons. One of the nicest things about the trail is that it's surprisingly unknown to most residents of Fairfax and Prince William Counties, despite the fact it is unbelievably close to a large number of people. Consequently, once you are more than a mile or two from a trail head, you'll find the serenity and peace that trail running so often provides.

The Bull Run/Occoquan Trail can be accessed at five different locations:

There are a surprising number of excellent trails to run on in this area. One of my favorite runs is an incredibly scenic 5 - 7 mile loop (depending upon the route chosen) that begins in the parking lot across from the Old Angler's Inn on MacArthur Blvd. Start by running up Berma Road (a dirt road that parallels the C&O Canal) for approximately 200-300 yards. There will be a chain link fence and off to the right is a yellow blazed trail that eventually leads up to the blue blazed Gold Mine Loop. Go left on the Gold Mine loop and follow it all the way to Great Falls Tavern. The trail is smooth and well maintained. At Great Falls, you'll have several choices. First, you can run back to Old Angler's via the C&O canal. However, if you're feeling especially ambitious or adventuresome, try running the Billy Goat Trail, which will be a blue blazed trail off to your right shortly before you come to the Stop Lock Bridge. Although you'll probably hike as much of the Billy Goat Trail as you'll run, don't despair. In my opinion, it's one of the most beautiful and inspiring trails in the area. It's hard to believe you're just a few miles from downtown D.C., while you're watching rock climbers and kayakers in beautiful Mather Gorge. 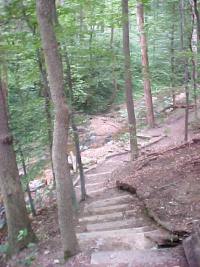 The Potomac Heritage Trail is a 10 mile trail that runs parallel to the George Washington Memorial Parkway between Theodore Roosevelt Island and the American Legion Bridge along the Potomac River. This trail, marked by blue blazes, is another little known gem in urban metropolitan D.C. It is hilly and heavily forested with sycamore, oak, poplar and beech trees. At times it can be steep and rocky and more suitable for hiking than running. The trail also intersects the Donaldson Run trail, which follows a rocky streambed up to Potomac Overlook Regional Park. Potomac Overlook has more than 3 miles of beautiful nature trails that are absolutely perfect for running. All are extremely well maintained and many even are covered with a soft bed of ground mulch. Wildlife, especially birdlife, abounds and there's old homesites, gardens and even a cemetery to view! 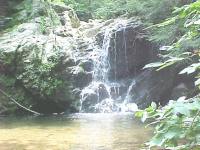 Patapsco Valley State Park, Maryland's first state park, encompasses 14,000 acres and has more than 36 miles of marked trails to explore and miles more of unmarked trails. This park is one of my favorite places to mountain bike and the factors that make it so good for biking--hilly, rocky, rooty terrain with plenty of stream crossings and log jumps, make it a challenging, but enjoyable place to trail run. Patapsco is divided into five recreational areas, most of which have trails. The Avalon-Glen Artney-Orange Grove area located near Elkridge, Maryland has a number of trails including the beautiful Cascade Trail. This 3 to 4 mile trail (depending upon the route) follows several streams and passes by a beautiful waterfall. It's possible to join up with a number of other trails and run for hours without ever hitting the same trail twice. 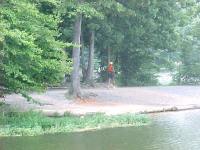 Burke Lake is a very popular running destination and is the perfect venue for beginning trail runners. This easy to follow trail is a very scenic, flat and smooth 4.75 mile loop that encircles Burke Lake. There are a number of runners who train here regularly, including most of Fairfax County's high school cross country teams. This trail gets particularly crowded in the late summer and early fall, as runners start training in earnest for the Marine Corps Marathon.

Back to the top of the page.